How to pay for books

This post was originally published in Polish. This translation has been slightly edited to explain some details that are likely to be obscure for people outside Poland.

I wouldn’t make a good emperor of the universe.

Sometimes I wonder what I would change if I had the power to shape the world any way I could, and always I come to the same conclusion: I don’t know. I see many issues with the status quo, but all the solutions that I can come up with have their own problems. And so it rolls.

But certain ideas seem sensible to me. For instance, I have a pretty clear vision of how paying for books (including ebooks) works in my perfect world. Before I explain it, though, let me say a few words about what I dislike about the current reality.

Let us establish right at the beginning that the need to incentivise the authors, as well as other people whose work is needed to create books, is obvious.

All the deficiencies of capitalism notwithstanding, as a society we suffer from a kind of doublethink. On the one hand, we praise libraries as temples of culture and knowledge. Their social and culture-making role is hard to overstate. On the other hand, we rightfully cringe when someone illegally downloads an ebook from the Net: it violates a social agreement.

Meanwhile, from an author’s point of view, in both situations their profit is usually lower than if the reader had bought the book. In particular, it can be zero in both cases unless the country implements some form of Public Lending Right.

Digressing for a while: in 2012, Kazik Staszewski called people who downloaded the then-new Kult album “paltry b*****es”. In response, a mock page popped up, called “Kazik’s Loss”1.

The premise was simple: make a copy of Kazik’s album to incur a loss of profit, then increment the Grand Total on the page. Actually, you can use any other album. Or, indeed, make many copies. Use your local disk to make it faster. Delete old copies if you run out of space. Go wild! Oh, and you’d better not share them online, lest men in black knock on your door.

(See what I did two paragraphs ago? I linked to the album on YouTube! It was put there by the copyright holder, but now you’ll just listen to that and not pay Kazik any money. I guess I’m gonna go bump the amount on the site. Or not, because it’s no longer up. But in 2021, last time the Wayback Machine successfully crawled it, the Grand Total was approaching 300 million dollars.)

I bring that example up because it illustrates pretty clearly that merely making a copy of digital connect (whether legally or not) is not a particularly meaningful act in and of itself. An USB stick filled with thirty thousand ebooks is not automatically worth $100,000. If I just read four of them, then only those four will present any value to me. The book brings value for the reader not when bought, but in the process of reading.

Thus, I think it would make sense to tie the payment for the book (or more precisely, for its content) to that very process.

How I imagine it

Hence, the following idea. This is a sketch; details would need to be fleshed out.

The more payers in the system, the better its chances to work. But obviously this cannot be enforced legally. Even if it were technically possible to devise a Readership Control Office, the very thought makes me shiver. For the idea to take off, a societal mentality change would be needed: a widespread belief that evading readership fees is just as unethical as not paying for the bus ticket. Hence the phrase “social expectation”.

While it’d be a strong expectation, I also think it’d be important that it be soft and non-exclusive. As a child, I used to spend a quarter of my life in public libraries. I vividly remember the gratifying feeling of interacting with an immense wealth you can wallow in completely for free. I wouldn’t want to take that feeling away from that young me, just because I was low on pocket money. Nor do I think that depriving people of library access if they can’t afford it would be a good idea. That’s why I say “you pay as long as you can afford it”. In my perfect world, it’s the reader who decides the support amount, based on what they can give and how much value they drew from the book.

Just how much that would be in practice? I have no idea, but I roughly guess typically a few dollars. A breakdown of the retail price of a typical book looks like this:

I imagine the fee would cover all publisher costs that don’t involve creating the book as a physical item, or some 30% of its typical retail price. Because the marginal cost of producing a new copy doesn’t include the same elements (and the marginal cost of producing a new copy of an ebook is zero), I guess the final price in the store might be roughly 70% of what it’s now; I also imagine ebooks could be downloaded for free or for a tiny fee to cover the costs of on-line distribution sites.

Another approach to determining the fee is to ask yourself two questions:

Just divide #2 by #1 and you’ll know what your limits are.

There’s one more reason why I like this vision: it’s not an all-or-nothing proposition. It can—and I believe it should—be implemented piecemeal, today, on the grassroots level. Indeed, it incorporates ideas that are already functioning in different places.

This article has been brewing for a long time, inspired in no small part by Matthew Butterick’s online-only book “Practical Typography”. The author states bluntly that the book is not free:

This book’s only source of revenue is readers like you. If you don’t pay, the book dies.

And some people pay. Butterick’s income is underwhelming, and the ratio of paying to non-paying readers even less so (the mentality shift has yet to happen) — but he admits that it’s an experiment in online publishing. And there’s no printed version.

Some modern authors publish their novels under free licenses, so they can be freely copied and shared: Goodreads lists 42 novels available under Creative Commons licenses. All of them have been can also be bought as paperbacks in the usual way. Seven of these are by Cory Doctorow. In his own words:

Not only does making my books available for free increase the number of sales that I get, but I also came to understand it artistically as a Science Fiction writer that if I was making work that wasn't intended to be copied, then I was really making contemporary work.

An example from the IT world: the full text of Peter Seibel’s book “Practical Common Lisp” is available online – and this also doesn’t discourage people from paying for the paper version.

I’ve taken the term “social expectation” from Marijn Haverbeke, who thus expresses his ideas on funding the software he writes.

Paying for the content after reading is a form of micro-patronage: it forms a bond between the reader and the book creators. So, I’d like to point out some other initiatives that also contribute to forming such bonds, albeit in different ways. I mean Humble Book Bundle and its workalikes like the Polish BookRage, where you can choose your own price for a set of books and how to distribute it between publishers, the platform, and a charity; and sites like Patreon, where you can support creators with regular payments.

Be the change you wish to see in the world

Thus spake Mahatma Gandhi, and I want to follow.

I’ll be frank: while I had read “Practical Typography” years ago (although not paying much attention), I hadn’t paid for it so far. If it weren’t for the experiment, I probably wouldn’t have remembered it.

But Butterick points out that we also pay for books in a third way: with our own time. A precious, non-renewable resource. Quoting him again:

Every great book is underpriced; no bad book is cheap enough.

Those words! Those words have been sitting in the back of my mind ever since I’d read them. With those words, Mr Butterick, I had incurred debt to you; and with the publishing of this article, I’m hereby paying this debt off. This shows that sometimes it takes long time for the reader to make up his mind about supporting the author. 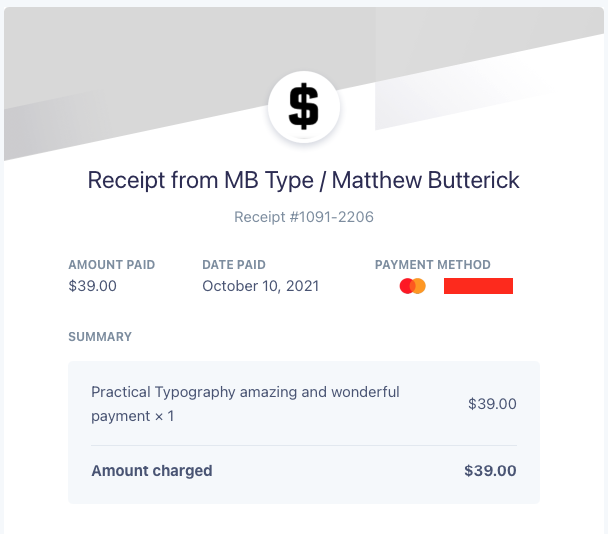 From my correspondence with Bjørn Larssen (go read “Storytellers” if you haven’t yet, it’s good; I hope Bjørn won’t mind me sharing this snippet):

I’m adding three more coffees to your ko-fi. Not just because I want the second book when it comes out (I do!), but because I dream of a world where people who can afford it support creators they read/listen to/etc. In my perfect world, there’s a social expectation to do that regardless of whether you bought or borrowed or pirated the book, and there’s a link to your ko-fi right on the last page of “Storytellers.” :)

For a while now, I’ve been toying with an idea to put a tip jar on bjornlarssen.com: a separate ko-fi, meant only for readers who wish to encourage and support me, or for those who pirated the book and now feel remorse. You’ve just proved to me that it’s not a bad idea after all and maybe I should just do it.

What you should do

Buy the books by authors you like. Support them on Patreon and elsewhere. Email them (if only to say thank you) and ask them to set up a Patreon account, share their PayPal, or set up some other way to support. Or invite them for a cup of coffee, if you can.